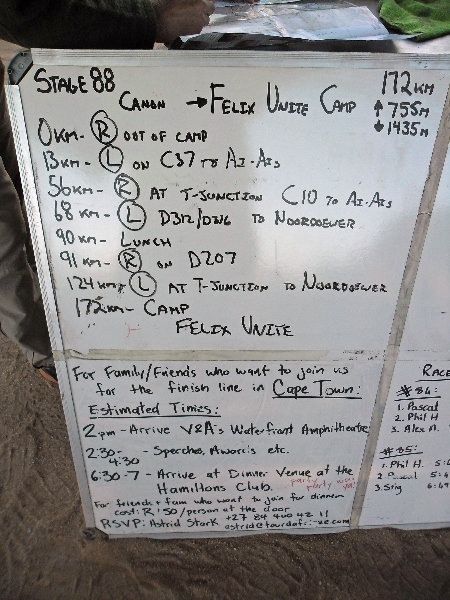 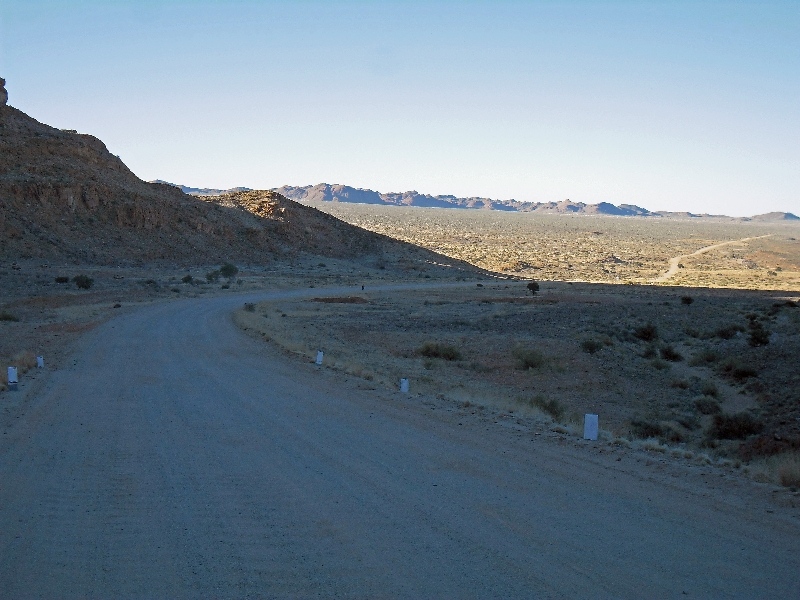 Yesterday the headwinds brought a cold front and this morning was chilly in the tent. I could wear all my recent purchases from Windhoek: thermal top, wool hat, full finger gloves and fleece. Along with long cycling tights and other layers I was comfortable. The posted distance of 172km along with yesterday headwinds had some folks apprehensive. I’m told ~20 people rode either of the trucks. Some starting at lunch and others all the distance. I decided I’d ride to lunch at 90km mark and then see after that. I’m glad I did since today was a stunning day as far as scenery was concerned.

It was hard to tell which direction the wind came from, but believe it was mostly NNE during the day so we had more tailwinds than headwinds today. Hooray! We started mostly cycling to the west. The road had occasional soft bits, but was otherwise reasonable road condition. We cycled around a huge rock outcropping to start. Nice views as we came along the rock, though it did seem like we climbed the same short hill a few times. I started with many layers on but decided each 10km mark I’d take something off (though not quite to the naked mile point). So at 10km I could remove the extra long tights, at 20km removed wool hat, at 30km removed outer jacket, at 50km swapped long gloves for short gloves, etc. It took us until 20km to come around the large rock outcropping.

After 20km mark we had a longer straight and then a good descent for multiple kilometres towards the Fish River Canyon. That unfortunately came to an end closer to 30km and then it was a good climb. However, this was excellent scenery as we went along the larger hills. At the 45km mark the sweep came up to me. While I’m normally slower than average this was first time the sweep caught up to me. Where are all the other folks that normally are behind me? I’m told pretty much rest of them were on the truck. 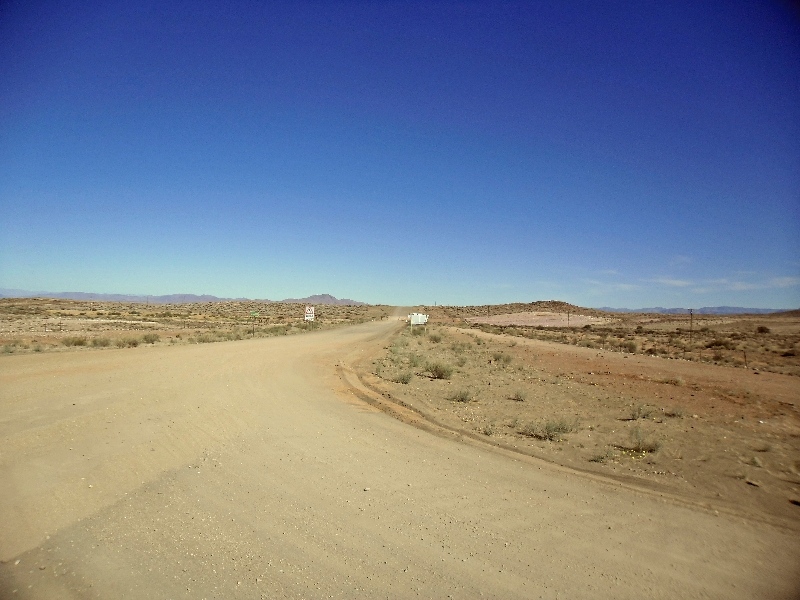 We had right turn at 56km and for next 12km there wasn’t much pedalling as the wind along with slight downhill just pushed us along. Had to still watch occasionally to stay off the worst soft sand and worst corrugations. At 68km going downhill there was a right turn here. Unfortunately, another rider ahead of me missed turn here, so eventually I wasn’t last before sweep but she had an extra long ride. After the 68km mark it was a slow climb up and over a hill and then another long sweeping descent. That last few kilometres before lunch were an uphill.

Ate my lunch quickly and assessed the situation. It was just past noon and I had 82km to go. Unless road was awful, should make it just before dark. I was told there would even be pavement the last 40km. The next 20km from lunch were stunning scenery as we followed a drainage and to our right was a large set of rock outcroppings. The combination of wind and descent even meant there wasn’t much pedalling involved – but instead having to watch carefully the track on the road. After this was still some occasionally pedalling but until 124km was a spectacular ride. 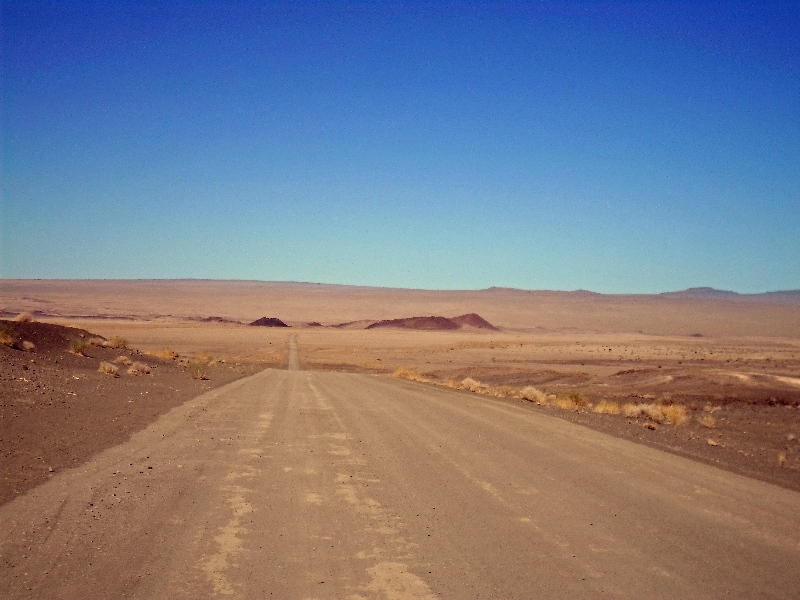 At 124km I found the road was still gravel. What was worse is we turned now into the wind and this part of the route had soft sandy bits. It was tough riding here. There was a “refresh” stop I noticed just in time at right side of the road. The TDA staff member had gone off hiking and I was along (except for the rider behind me who had ridden the extra credit distance). After the refresh we could see a large vineyard area – as well as one of the largest shanty towns I had seen. The simple workers huts were a bit shocking to see. 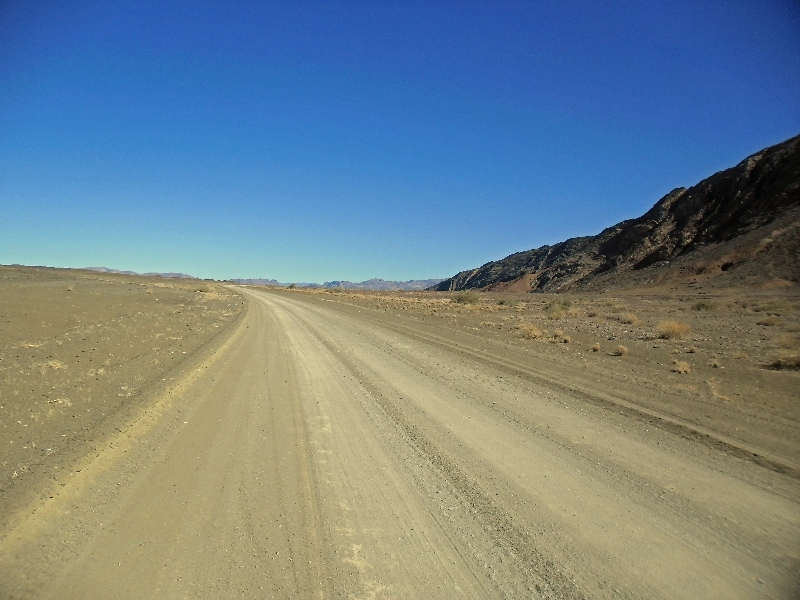 It took to 130km before reached pavement. Yea! The next 40km were mostly cross wind though also some headwinds in here. I was getting tired as was riding over the last of the hills. As I rounded the last bend, I could see settlement on the South African side as well as where Felix Unite Camp should be. Was even pleasantly surprised to find it appear two kilometres earlier than expected. I was in at 4:30pm, a long but beautiful ride. Had enough time to get me tent set up and not long after 5pm sunset.

We’re now camped at Felix Unite camp for a rest day tomorrow. Not quite sure what to find here, though will be time to get laundry and other chores done. Otherwise also a chance to relax and get ready for the six day riding section that will bring us to Cape Town.