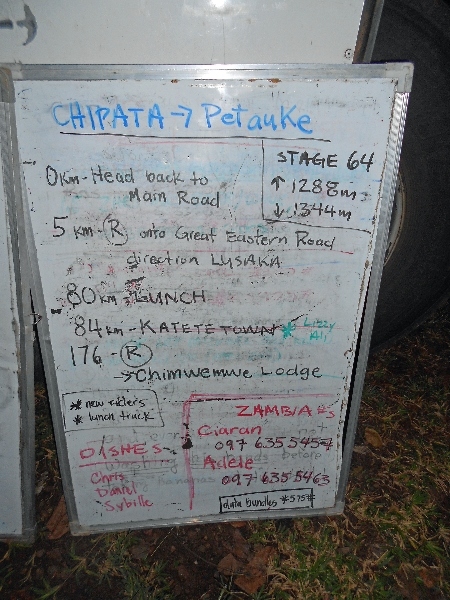 After some deliberation, decided to take the truck today. My leg was still swollen, though the pain was considerably
less. One idea was to perhaps already try riding for a bit and see how it goes. The other was to wait just a bit to
avoid risk of prematurely letting the infection gain upper hand again. In the end and with consultation of our medics, caution prevailed. In the end, even if I’d decided my original plan of riding from lunch, it likely wouldn’t have happened, but more on that later. 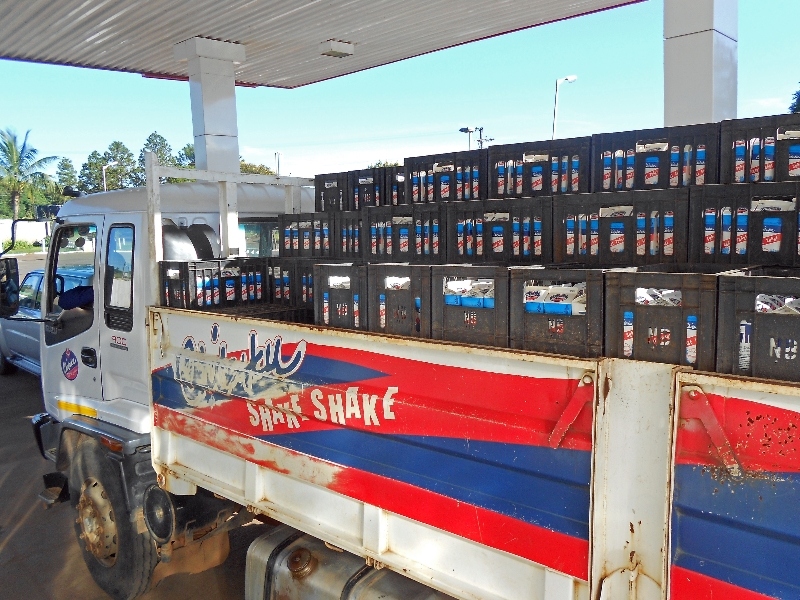 First photo shows a truck carrying “Chibuku”. This is a local fermented drink based on maize that we’ve seen now in
Zambia and Malawi. It is a whitish color and creamy texture that doesn’t stay in one liquid, hence the cartons all
admonish drinkers to “shake shake”. None of the riders who tried it found it tasteful, so not much of a recommendation
for me to try it either.

Four of us on dinner truck this morning. The Zambian countryside continued with gentle hills – though today would have a few longer ones to bicycle across. We passed mixture of farmland and forest areas occasionally with a bright yellow sign saying “Look! Conservation Farming Pays”, presumably due to soil conservation practices. The terrain, bright sun, puffy white clouds and temperatures seemed ideal for riding.

At 80km was the lunch truck and we stopped and got lunch. Racers had already arrived and a few others were just starting to arrive to lunch. A few other cyclists had just set off from lunch so were barely on the road. After eating lunch, got back to the dinner truck for second leg of the journey when I was told there would be delay and I could go back to lunch area again. Slowly more and more cyclists arrived there including those who set off from lunch originally but were now returning.

Apparently there had been disturbance in town of Katete about 4km ahead. We saw a truck filled with police/soldiers with rifles drive past. We also saw an ambulance go past. One apparent story I heard was the disturbance was related to a past murder that towns people felt hadn’t been adequately investigated. [Update: This link provides news report of the incident: Katete Riots]

After short while, the all clear sounded and we were allowed to continue. Our dinner truck filled up to eight cyclists –
since prospects of ~100km more riding now had an hour less of time and some were also still concerned on potential
unrest. The remaining cyclists went ahead and were encouraged to ride together in a group. We followed a bit behind
including stopping briefly to assist two riders with major bike issues: one with a crank arm that had loosened and
another with a derailleur that no longer worked. As we rode through town, there were armed soldiers/police perhaps
every 100 meters or so carrying their rifles.

Up ahead a short distance we saw the entire group of cyclists collected together. They were waiting for all riders to
arrive and then after that the entire group did the next few kilometers in a convoy fashion. Up front was a truck filled with Zambian soldiers. Following was the entire group of cyclists and following were the TDA vehicles. Slowly rode past the worst trouble spots including seeing areas with active detainees. In this stretch we did hear a few gun shots behind the group, though it was unclear their origin or target and certainly didn’t seem to affect anything we saw.

After this few kilometers of convoy, the police escort pulled to side and let the group then proceed at individual levels. We also didn’t see police after this point. So still not clear on exact issues at Katete though felt overall it was handled with reasonable care for our larger crew.

We were then back to riding across on good road the remaining ~90km. Similar scenery as before. Arrived at a nice
lodge area. Rooms weren’t too expensive and so decided to splurge just a bit with a room and chance for a healing rest.