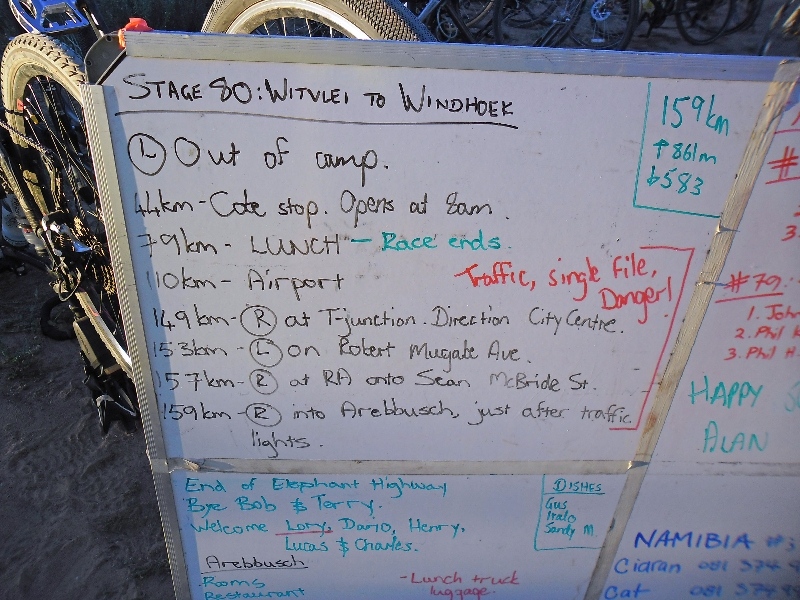 End of a section and ride into the modern city of Windhoek. Through the day, the roads got busier and the terrain after the airport (110km) got hillier.

It was again perhaps 4C last night so again time to put on new layers and ride slowly in the cold first few kilometers. Fortunately, after sunrise the temperature quickly warms up.

The terrain initially reminded me some of the wide sagebrush valleys of Nevada, Utah and in parts of Colorado. There were wide sweeping views and plants colored similar to sagebrush. There were also some long very gentle climbs. Once the larger trees reappeared the similarity also went but the Kalahari desert is closest I’ve sensed to western USA. Those larger trees were along the way when at 44km I stopped at a coke stop. Also here were some German researchers looking at Cheetahs so learned a bit by talking with them as well.

After the Cheetah coke stop it was a straightforward ride to lunch and 79km. Both trucks were parked here and we were asked to get our passports since might be needed at police/agricultural check later (in hindsight nobody asked for mine, but better safe than sorry).

As we left lunch, some more tail winds and warmer. It was still desert areas as we approached the airport. Even the airport looks like it was built a ways out of town and not much else around it. Perhaps one reason it was built so far away was some of the best flat lands. After the airport, the road got more short sharp hills to climb over as we went through some ridges. The highest of those ridges a little before 133km and then the agricultural stop there. A large truck was to my left and they just waved me through.

Shoulders were still narrow and traffic was heavier, so took some concentration the last kilometers to reach outskirts of Windhoek at 149km. Just past this was new bike shop – first western style one I’ve seen here. I purchased some long finger gloves. After that a few more turns and few more hills to reach our camp in Windhoek. Will be nice to be here for a rest day.