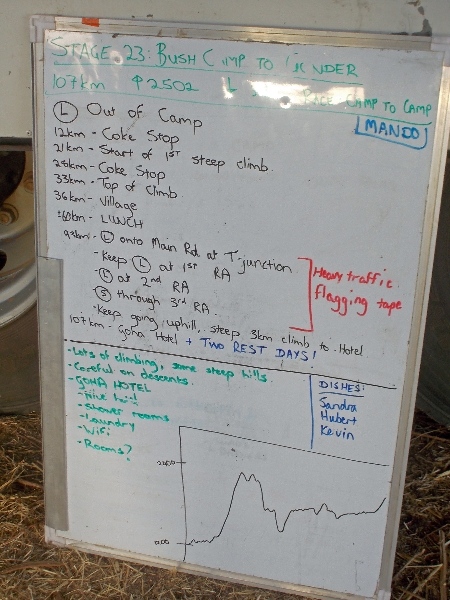 have arrived in Gondar and now have a double rest day here. Internet is very slow, but hopefully mostly an influx of cyclists all trying to access at same time, but will try next two days to get things updated. Today was a “mando” day, which is short for mandatory. This means that official racers need to ride the day as it can’t be one of the five “grace” days that are allowed. Mando days are typically tougher than other days and for today that meant 2500m of climbing.

For me I decided to take it just a little easier and ride the first 60km to lunch. It still took me until almost 1pm but I really enjoyed the ride. Ethiopia is built on sides of hills and today was no different. There are people everywhere: in villages, walking the road and otherwise observing. In addition the road also has many donkeys, people herding goats/cows/donkeys across it. Hence, vigilance is always required particularly on the hills.

We have also shifted to a “thin red line” approach to camp and lunch stops. What this means is that staff has surrounded the camp with a red cord that is staked around our outside perimeter. Locals are hired and then kids and other locals are requested to stay outside the red line. It makes for an interesting combination. For example, last night some riders had decided to play a movie on a portable player (the Lion King). They were sitting just inside the red line and outside of the line were a cluster of half a dozen kills carefully observing. 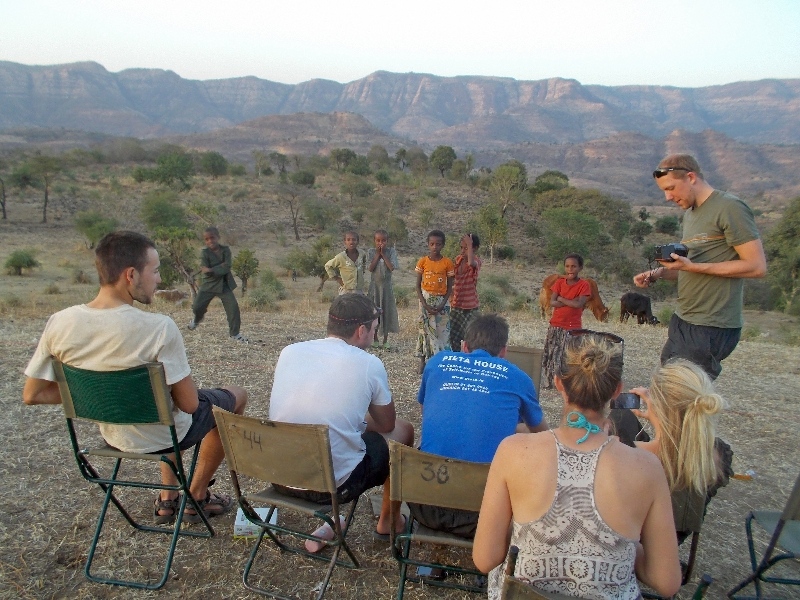 This morning I packed all up and got on the road from camp. We were informed of substantial climbing over a large hill before lunch and then descent with climb into Gondar City itself. Almost immediately the climbing began, short little climbs that my computer said 10% or 12%. After a few hills, came down to a river at 12km and a nearby village. The kids were all out yelling at us as we passed (most common: “you you you”, “hello”, “where you go here”, “money”). Some riders have has occasional difficulty with sticks or rocks, but so far I’ve been lucky. I do try to pre-emptively yell out the “hello” and “salaamno” and other greetings. 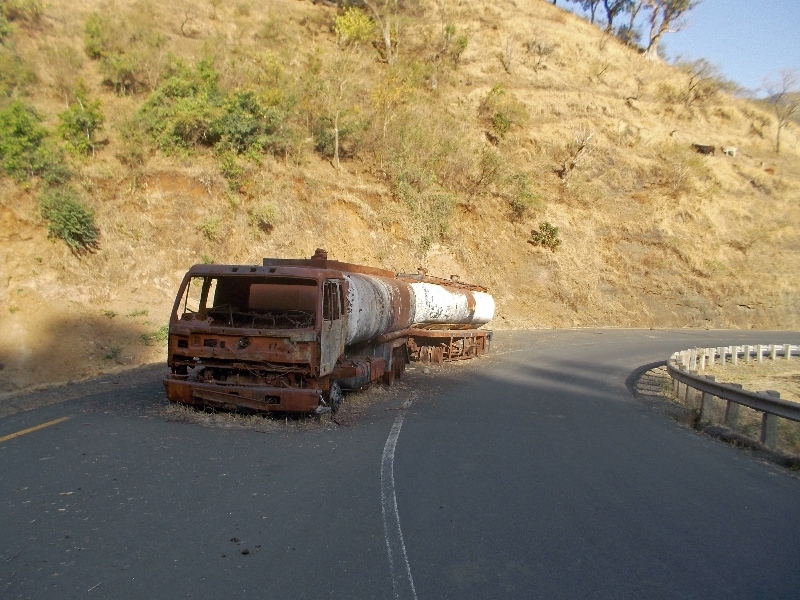 After that 12km mark, we had a short 2km climb posted. In middle of road was a tanker truck that was disabled and apparently had been there for three years just blocking one lane. After the climb finished a descent and then from 19km to 35km the major climb began. Fortunately, this one was closer to 5-6% grade so I could put it in low gear and slowly grind up it. I did however make a coke stop along the way. On the top, you could see back what we’d climb and eventually into next descent, so this felt like a real accomplishment. 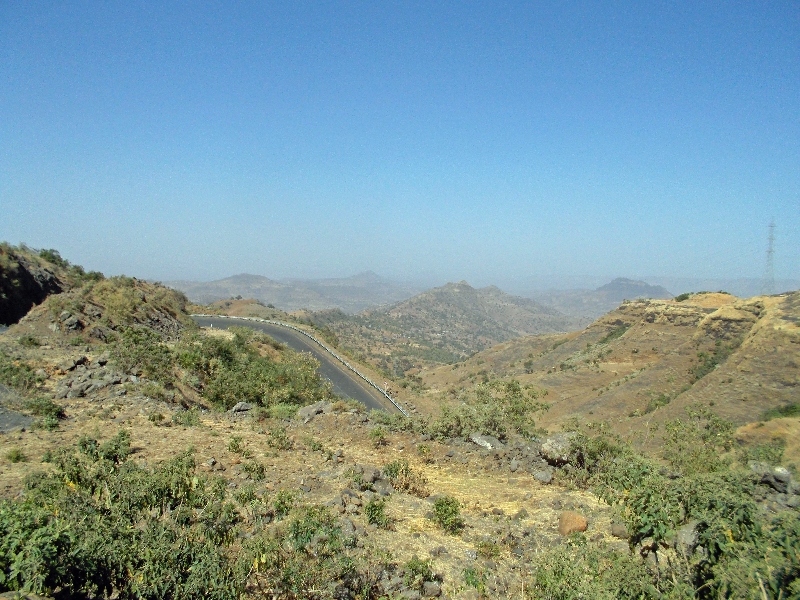 The descent was fun and lasted most of the way down to 50km with only a few short (steep) interruptions. After this some gentle climb and descent along the way and found my way to lunch by 1pm. There were nine of us riding in the truck from lunch. After long and challenging morning was right thing for me. Still was a wait until everyone assembled and then we got up to the Goha hotel. 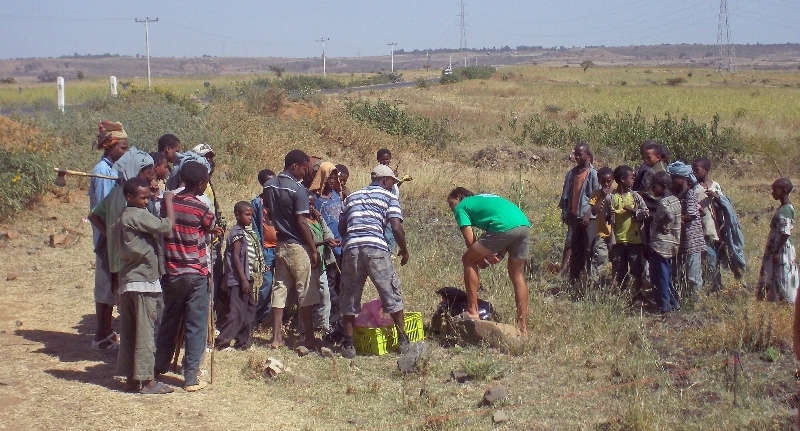 The hotel is nice. I’ve already had nice good shower (though it did overflow onto the floor). With two days, I’ll do a bit of bike maintenance and otherwise recover from eight tough days on the road (more to tell you about in a bit :)). However, Ethiopia is completely different than Sudan was and a rather interesting contrast.

Photo below shows me before my shower. Surprisingly most of that brown was tan and didn’t rub off in the shower. 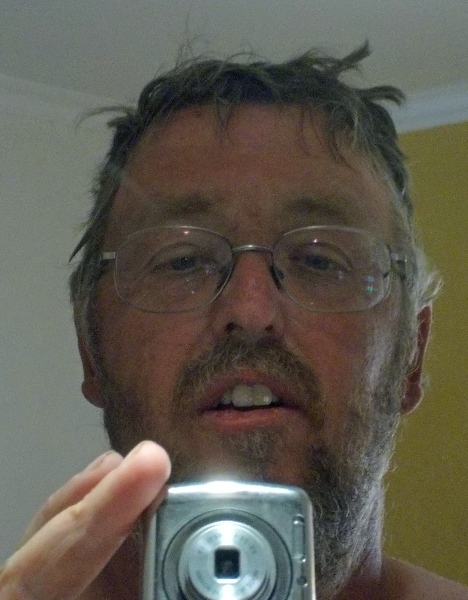