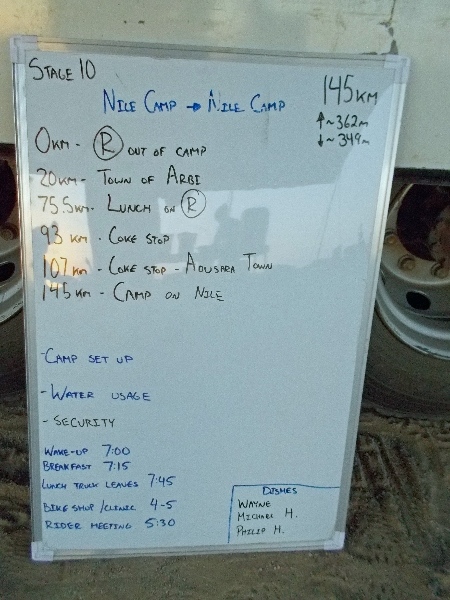 Today was the most challenging ride yet.

It wasn’t so much the distance, which we’ve done before. Instead, the afternoon was just a little warmer than before. Also as we came closer to the Nile, the flies were pretty bad. We’ve been told the timing coincides with flowering cycle of the dates and they weren’t there last year. Hopefully, this also means short lived as well.

This morning the group was up early, with unwritten rule – beat the heat. A pretty fanatical group of people to watch all the headlamps as people are taking down their tents in the dark. I joined them, got my stuff ready and was on the road by 7:45am. Once again, our ride started out well, all long as we didn’t stop (those flies again). We followed the river more closely and also saw more villages. Time for one coke stop and then lunch.

At lunch the fly infestation continued, so didn’t linger. Also temporarily ran out of bread. So I hopped back on the bike, but to no avail as the heat came. My odometer said 41C and decided I wouldn’t look at it further in the afternoon. While we’d had more tailwinds, we also came across some curves and more diagonally into the wind. At 93km one more coke stop and then a slow steady ride to reach camp at 3:20pm. I was beat, but a quick soak in the Nile again helped refresh things.