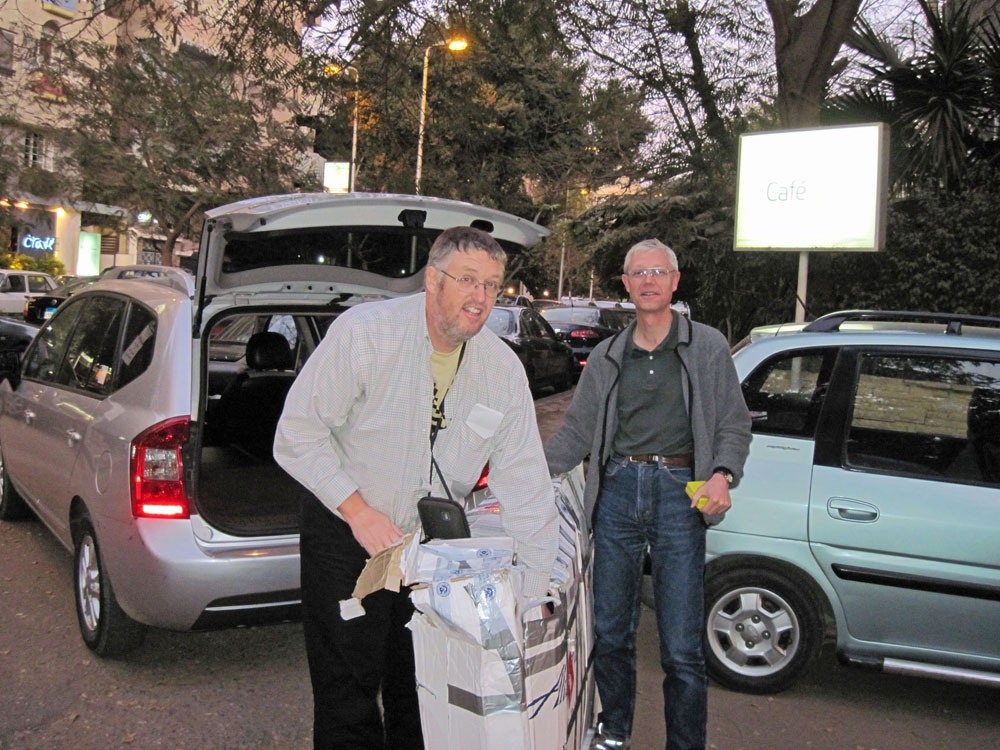 Made it to Cairo after a long three hop flight. The bike is still in the box, but tomorrow adventure will be taking it out and making sure all is ok. The bike box doesn’t look too beat up, though front wheel was off so need to check spokes in case anything leaned on them.

Thanks to family on both ends to make the travel just a bit easier. On departure side, my father dropped me off at the airport. We had loaded one large bike box and two duffel bags. Afterwards discovered I had accidentally left behind my toiletries bag. Most is replaceable e.g. toothpaste and some TP, but also need to see if my multitool or spoke wrench was in the bag.

It took a while to check everything in. The bike box was being reused and was large side airline box so a little flimsy. We reinforced from inside some extra more sturdy cardboard as well. In addition to the bike, I put four tires and an extra rim in the box. I was a little surprised to discover when weighed at the airport that it totaled 60 pounds in the bike box. The other area I had some extra stuff was in some spare parts. Two large duffels (minus toilet bag :)), were each 43 pounds. I expect I’ll be pretty close but still under the 100 lb weight limit for TDA. A little surprising to me since I remember leaving for Australia twelve years ago and bike + gear totaled 100 pounds total. I’ll make another good look at stuff over next few days, but should have most things packed well.

Flights were uneventful. First leg was to Newark and we were 40 minutes late departing. The pilot said something about delays still sorting out baggage, hopefully not mine!. However, once underway we made up some time and were only 20 minutes late into Newark. They were boarding the flight to Istanbul when I arrived, but made that connection as well. It was a nine hour overnight flight crossing the Atlantic. We added seven time zones so in the clock read 16 hours later on arrival than departure. Got some sleep but next few days will need to adjust to time. Istanbul was a huge airport that seemed to be a crossroads between flights heading both east and west, and also covering the middle east well. After a three hour layover, boarded the last short two hour flight to Cairo.

Looking from the sky, this area is very arid. Dry dusty desert areas. On arrival, bags arrived at least as quickly as I expected. My brother had arranged a minibus and this was also convenient to drive into the city. Along the way I was spotting the road and traffic behavior. We went along the main roads here. However, the traffic was almost 100% auto and truck with only an occasional bicycle, pedestrian or cart. I was surprised there weren’t more scooters. Lane markings seem to be more advisory than in the US, with everyone squeezing in where they can and passing both left and right. Despite this, still more orderly than some places such as India where I’ve cycled.

Nice to have arrived. Tomorrow time to reassemble and check out the bike. Also chance to go after the Sudan Embassy and see about a visa. Glad to be here, just one step closer to getting on the road.