Last weekend of August, I drove to Wichita Falls, TX to take part in the annual Hotter than Hell 100 bicycle ride.  The ride attracts ~14000 cyclists and is billed as the largest century ride in the USA.  Below is photo of a large group all lined up along the main street awaiting the start.  Once the starting gun went off it took 25 minutes before I cross the start line. 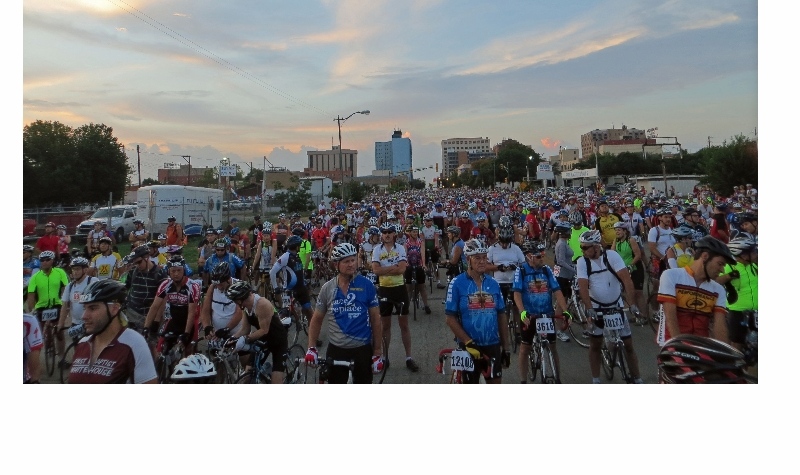 The ride started as a way to celebrate the 100th anniversary of founding of Wichita Falls – 100 miles in 100 degree heat for 100th anniversary.  That was back in the 1980s and the ride has continued since.

Each rider is asked to a categorize themselves as scorcher (5 hours or less), gatekeeper (5-8 hours) or hopeful (more than 8 hours).  I went with hopeful category since I knew I wasn’t so fast.  That also meant I was further back in the starting lineup.

Once the ride started, I found the course was surprisingly flat and I was able to get a good start, passing many people along the way.  Rest stops were every 10 miles and first 10 was very easy.  Next 10 was still pretty crowded on the road, but gradually the riders spaced out.  Before 30 mile marker we had our first headwinds.  This was part of a ~20mph wind from south.  By 40 some more winds but there we turned the corner away from wind.  There was surprise rest stop at 44 and then a larger lunch-type stop by 50 miles.

I was feeling reasonable by 50 mile mark, though hadn’t eaten a huge amount.  I’d gotten up at 3am to drive last bit to the course and breakfast was so-so.  Also the rest stops had fruit but nothing real big.  So I at four cookies but still felt a bit hungry.  I’d been drinking one water bottle per 10 miles.

Getting to the 60 mile mark, I could tell my body was feeling effects of heat and not as much food.  We had a brief 3 mile stretch into wind and then mostly cross wind for a while.  I found myself stopping feeling pretty warm.  By time I got to 75 mile rest stop, I was definitely feeling a light heat exhaustion.  I tried to cool down with some cold towels.  Drink some though felt slightly sick.  Wasn’t quite sure I would be up to rest, particularly with headwind section coming later.

Decided to SAG from there to next stop.  That was mixed blessing since it took a while for SAG to show up and that didn’t help me cool down.  In hindsight time would perhaps have been better spent cooling down and regrouping.  I did learn that I could ride fast to start, but still needed to see what better I could do for the worst of the heat.  Disappointing to have my body slow down like that, though better safe than sorry.  Next time, I’ll bring bigger lunch/breakfast and try eating as well as drinking before it gets too hot.