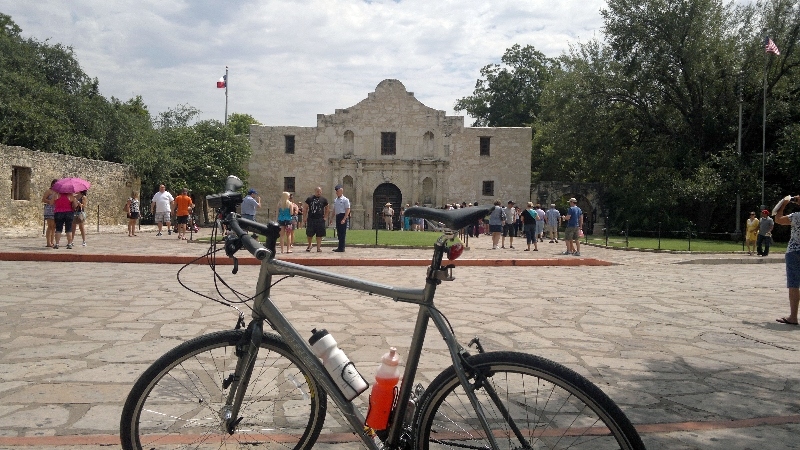 On September 8th, I bicycled from Austin to the Alamo in downtown San Antonio.  It was a fun preparation ride.  My Africa bike was still in Portland, so I took my commuting bike.  Weather forecasts showed a cold front coming.  While the predicted highs of 93F were only slightly cooler than normal – lower humidity and a north wind combined with coolest weekend since moving to Austin for a great cycling day.

I still decided to get out early, about 5:15am and rode the first hour and a half with lights.  This worked fine since it was mostly routes I already knew – though FM1626 was already busy at that time.  By 6:45am as it was getting light, I passed through Kyle and 18.5 miles.  From here some nice backroads and into San Marcos at 30 miles.  Until San Marcos I had been able to avoid the I-35 frontage road but here I reached I-35 and cycled alongside for about 8 miles before finding Hunter Road and quieter riding.

New Braunfels was next town and crossing wasn’t too difficult in early morning.  Not long thereafter 482 provided some more country riding before things started getting busier about 65 miles leading into San Antonio.  This last stretch on Old Nagadoches Road started becoming busier without much of a shoulder but most traffic was reasonably behaved.  Google Maps bicycle route picked some smaller roads to lead me right into downtown San Antonio.

Including some stops for food, I was at the Alamo by 12:45pm.  7 1/2 hours since starting.  A nice tailwind and some good cycling overall.  In afternoon I explored the downtown including the River Walk and some of the shops as well as the Alamo itself.  Stayed overnight in hotel and then next morning cycled ~9 miles back out to the Airport to rent a car and return back to Austin.  Overall, an excellent and fairly easy training ride.